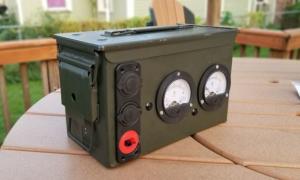 The following is a battery box build I wanted for field operations. Overall dimensions at 12in x 6in x 7in and the whole unit is about 12lbs.  I started with a fairly good-sized ammo box I acquired at a hamfest I cannot even remember how long ago.  My first attempt was with a salvaged lead-acid UPS battery, but I found it too heavy to be practical, and the cells were not in great shape. I did some reading on Lithium Iron Phosphate and decided to give that a try, especially since a 20aH was just about the right dimensions.  The very first iteration was with the triple bulkhead mount outlets similar to Powerwerx, but definitely a Chinese knock-off. When I bought that panel a few years ago, it did not have an Anderson PowerPole module, but I was able to locate a 3D Print STL file and printed my own. Since that time, I see Powerwerx does carry them now.  I added a power button for the USB power module since it was in an "always-on" mode. I found a step-index drill bit sourced from Harbor Freight was sufficient to bore through the steel casing.  The next iteration was to put in a voltmeter and ammeter.  The units I ordered from Amazon were larger than I anticipated, so I had to go back and get a 70mm carbide hole saw (so yeah, I have one of those now).  I added a powerpole "bus" to eliminate the wire nuts and electrical tape, making it feel a bit more solid.  I padded the battery with some foam packing material we get tons of at work every time we get a new computer in and secured the internal components with urethane glue.

I finally got a Satellite QSO 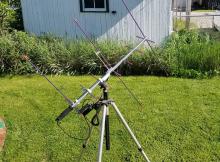 Amateur Radio milestone this morning: my first satellite QSO! Bounced a signal off of AO-27 to grid EM55 (Tennessee, thanks WA4HFN) on a 5 watt handheld transmitter hitting an orbitting repeater the size of a shoebox at 1,700 miles out, in motion, with a 9 minute window.

Not too bad for a first run at the HamClock amateur radio project. I have some finishing work I need to fix on the frame, and a 90 degree OTG USB cable would work better, but, the Pi Zero seems to handle the display just fine. I definitely need to get in and fix the display resolution on the X windows side, it's just a little shy on the vertical pixels.

Tonight's adventure in home electronics: replacing a rotary antenna input selector on an MFJ versa tuner II. The factory soldering is so ugly, it looks like I did it. On the plus side, the finished repair looks like factory condition

Is Amateur Radio Still a Thing?

I ventured out to the Fulton County Amateur Radio Club monthly meeting on Monday. It's a nice group of guys all excited to help and answer questions for the new HAM radio operator. I was waffling on which radio to purchase: a hand-held style (HT) putting out around 5 watts, or a mobile unit putting out around 50 watts (but with far less features). I really just want to be able to hit some of the local repeaters in the northwest Ohio area, some of which are on I.R.L.P. and EchoLink. The Wauseon repeater is around 7 miles from my location, and I want to be able to at least hit that one with a clean signal. The guys at the club assured me a 5 watt hand-held (with a good antenna) will be more than adequate to connect over that distance. So I finally ordered my radio this week, going with the Yaesu/Vertex VX-7RB. It's a quad-band (6m/2m/1.25m/.70m) HT with enough bells and whistles to keep my occupied and out of trouble for a while. At least until I get my General Class License and start getting into HF. I did have my first EchoLink contact last Sunday. While playing around with the software settings, I had a drop in QSO with a nice guy in Australia. We chatted for about half an hour which was surprisingly fun. The new HT arrives on Wednesday, so I'm looking forward to that!

This site uses cookies. By continuing to browse the site you are agreeing to our use of cookies.